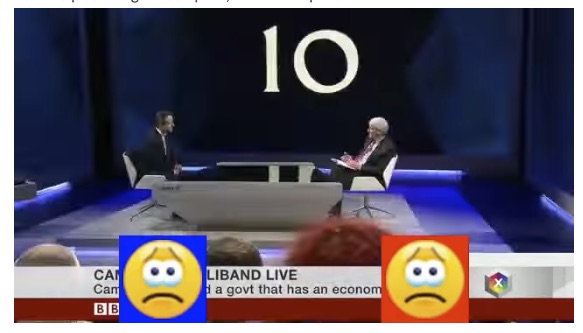 As we approach the election, it becomes apparent that the narrative landscape of politics has changed. In the past, the discourse was led by inky newspapers and the satirical sniping of broadcaster-sanctioned comedians. The last election, in 2010, certainly had a social media component – manifested by the American-aping ‘televised debates’ and the associated back-channel chatter on Twitter. However, in the intervening five years, the size of this channel has increased enormously (approx 30m users in Q1 2010, to 288m users in Q4 2014)
It’s now possible to use this ‘big data’ to get a handle on the mood of the nation. Tweets can be read by algorithm and classified as positive or negative. Sentiment analysis is big business, harvesting the millions of opinions expressed online, and turning them into numerical values.
Brandwatch recently released sentiment data for David Cameron and Ed Miliband during the BBC Paxman interviews. In the video below I have used these data to plot the mood towards the two leaders during the broadcast – represented by red and blue backed emoticons. If the mood towards to politician is positive, the emoticon smiles, if the mood is negative, the emoticon cries.
Thousands of tweets, reduced first to numbers, and then to emoticons. Watching the result I’m struck by how the mood seems mainly negative towards both men. Is this a reflection of a national disenfranchisement with politics, or is it simply a reflection of social media itself – a place we go to complain, rather than praise?