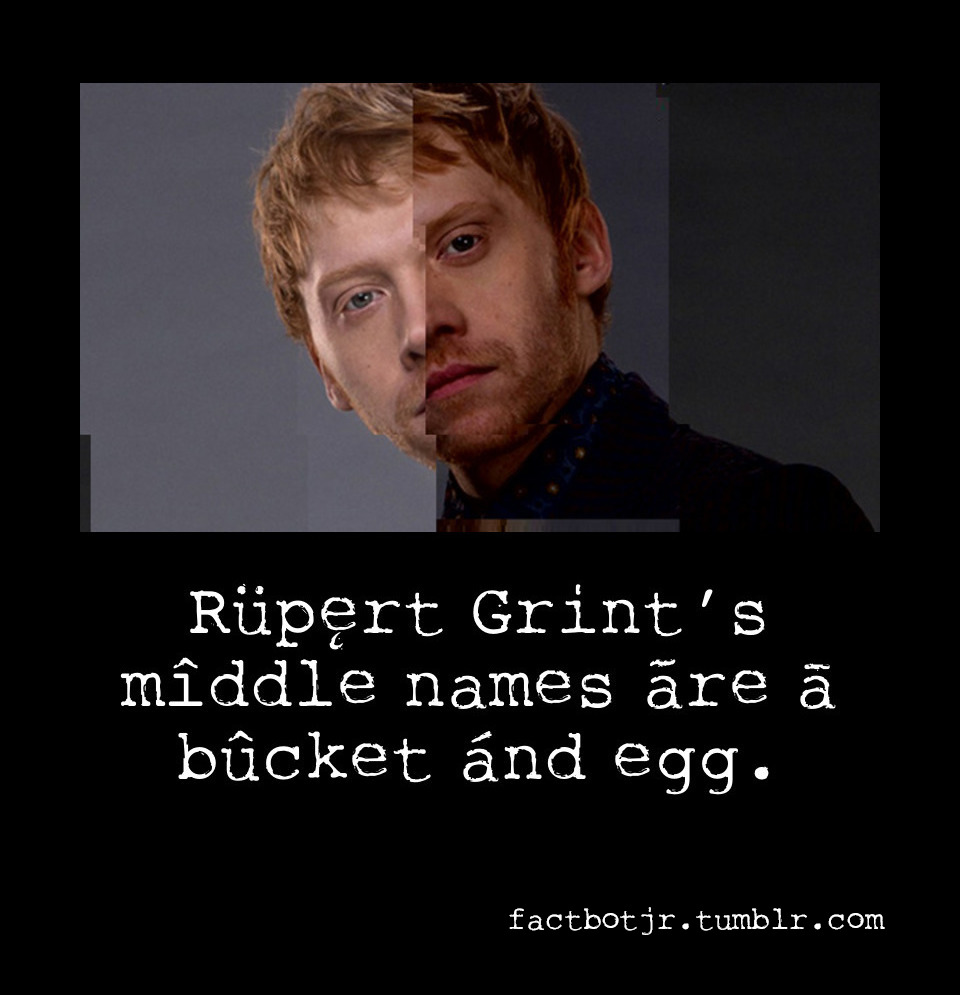 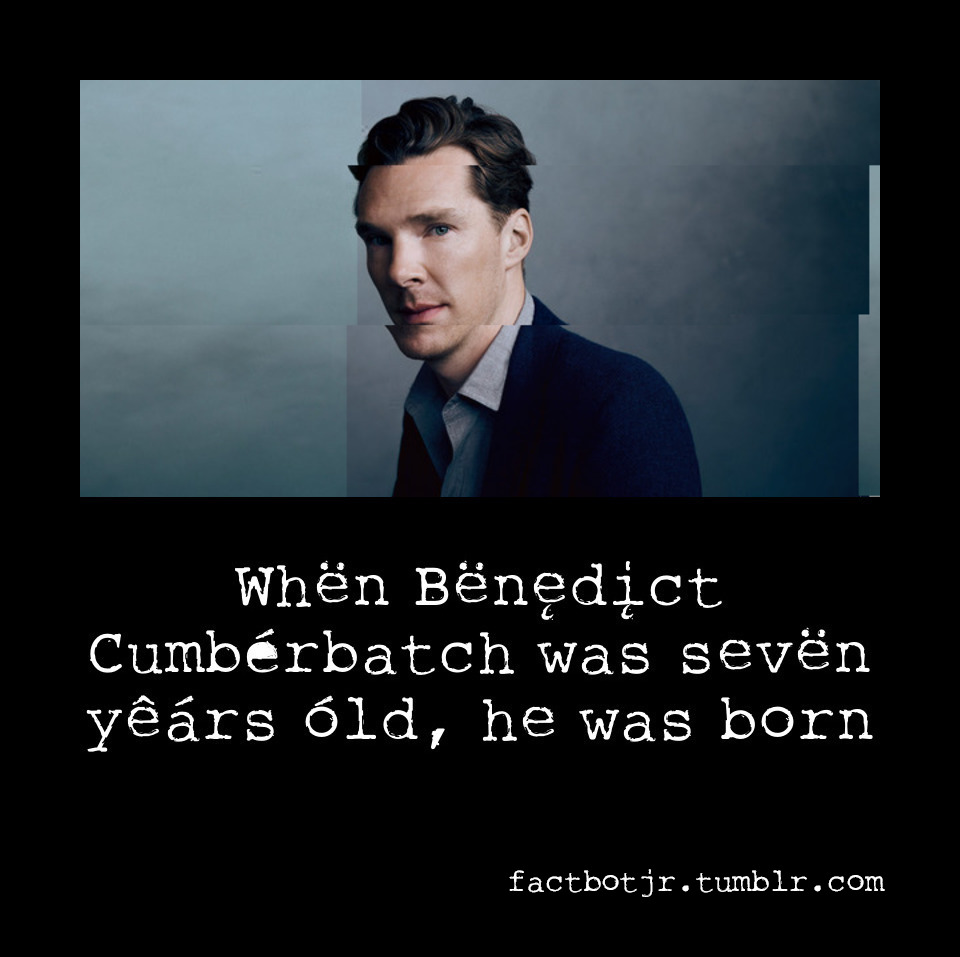 The world has moved on since I released @factbot1 way back in March 2014. Back then it was just a humorous critique of the emergence of politicised lying on social media. Now feels like some sort of awful portent. It’s now the middle of 2018 and Facebook is embroiled in an international data scandal, while Twitter is over-run by Nazis and Russian bots.
In the world of Fake News, fake facts are now our reality.
Though conceived primarily for Twitter, factbot1 also posts to tumblr and over there it has built a loyal following of over 8000, who seem to genuinely love some of the things it posts.
One factbot post has generated 190k ‘notes’, orders of magnitude greater than anything the Twitter incarnation has achieved.

Tumblr is a very different space to Twitter. The demographic is heavily skewed to teenagers, and is no place for middle-aged man like me. However, my eldest daughter is a native of this bizarre land and is able to keep me abreast of the latest nuances of Tumblr culture. (The fact that her father is the creator of a well known Tumblr-bot is greeted with bemusement by her friends.) 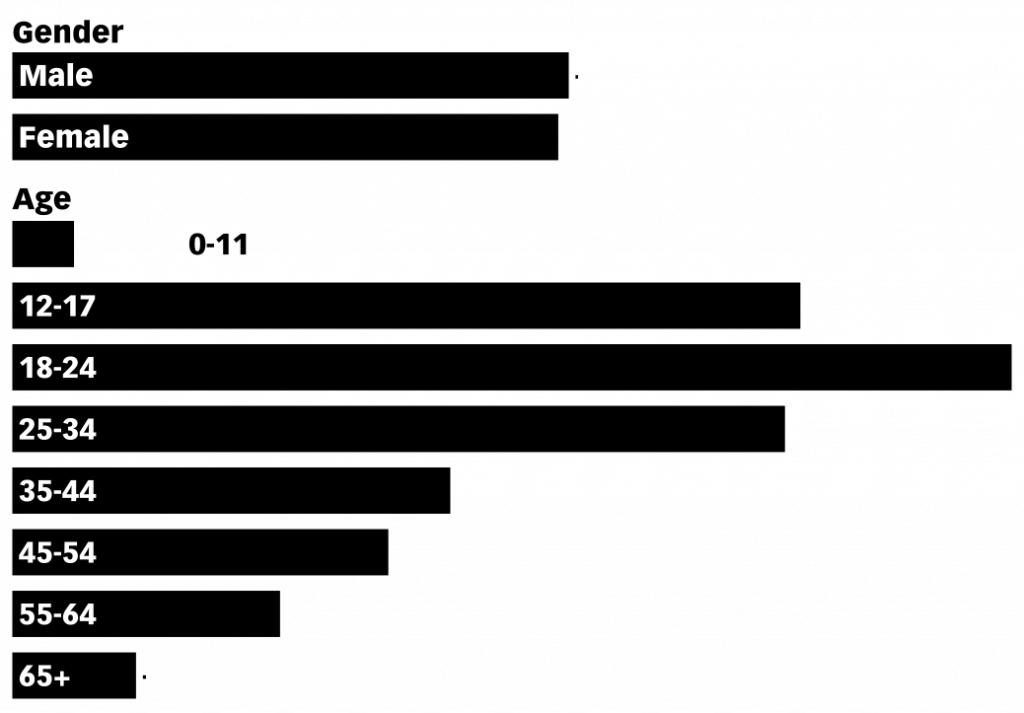 She tells me that tumblr loves bots, and the Tumblr audience, mainly Generation Z teens, greet them with empathy and support (just as they try to do with each other).
This fascinated me – a social network that loves bots and still encourages empathy, rather than lies and hate!?
Tumblr timelines are filled with in-jokes and memes, fan art and heated social debate. Kind of like the way Twitter was before it became overrun with Alt-right apologists and bot-farms.
To make a bot that would work in this environment would require a domain expert, and luckily I had one living in my house. Factbotjr is very much a collaboration between my daughter and I, so I asked her to write a few words about it:

Tumblr’s community choosing to have empathy for particular bots has made it difficult to see my role in fabtbot’s development as anything other than familial, monitoring their work and observing how others interact with them.
The conversation that led to the birth of factbotjr, as I remember it, was about the differences between factbot’s tumblr audience as opposed to its twitter following. While twitter users are excited by the nonsensical (or occasionally almost believable) facts created, tumblr was fascinated by the occasional imperfection or error made in the facts’ formatting; for example, a popular fact circulated for a while as “the goldfish is made up of millions of tiny,” or whenever it spits out something about toads, it accompanies it with an image of toad from nintendo, or, similarly, facts about goslings are headed by the same photograph of Ryan Gosling. 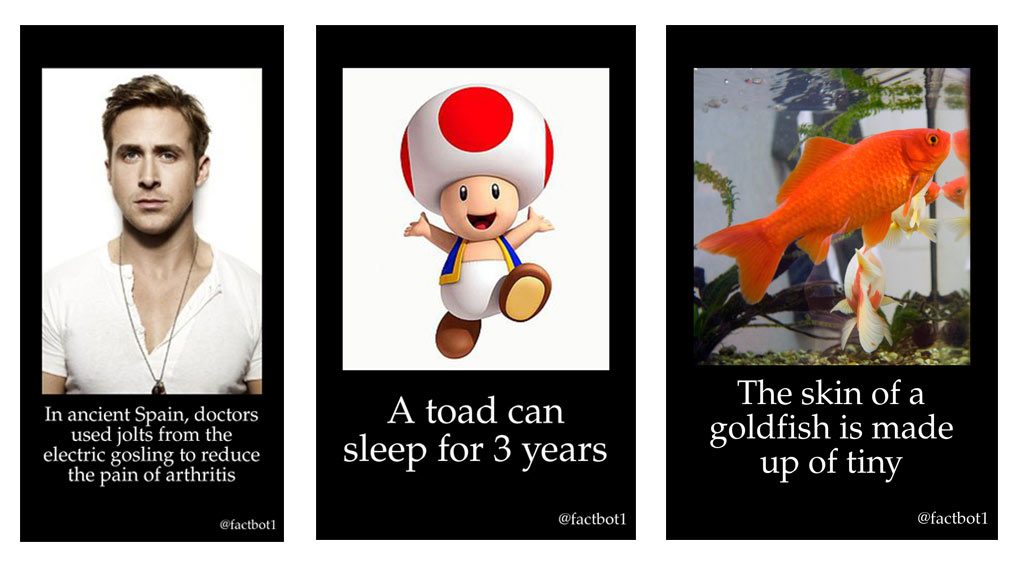 It was this one which started the conversation. This, and the one or two other facts which involved celebrity names. Tumblr’s relationship with celebrities can border on cultish, and I knew that there had to be something there; if a bot could make similarly endearingly wonky facts about the right kind of stars for tumblr’s younger demographic, it could lead to some really fun things.
At the time of writing this, factbotjr is still writing about people not quite in the right obsessive sphere necessary for their true cult-like potential to be realised, but they’re close. A few weeks ago, I had the honour of announcing the existence of factbotjr as factbot themselves. I deliberately left the post alone for a few days after stating simply, “I have a personal fact,” and tagging it as “factbot’s first words,” in order to allow others to respond to this before the news was published. The response was small, but far funnier than I had anticipated. 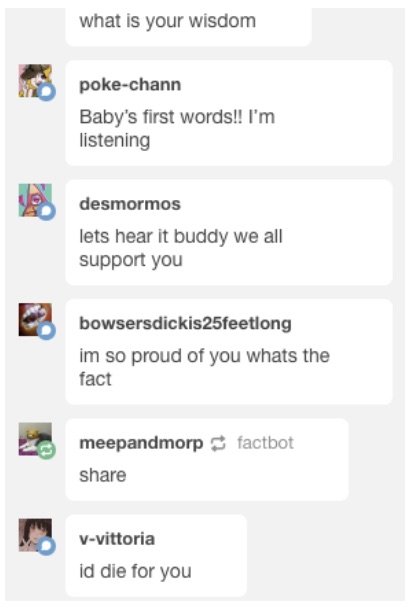 Factbot then reblogged a couple of their child’s best posts, effectively showing them off to their much wider audience. Currently both factbot and factbotjr are working hard, still producing adorable nonsense, such as factbotjr’s:
“DID YOU KNOW? The rïng Ryan Gosling gavë to Chris Brõwn was worth 1.2 million mâggots.” 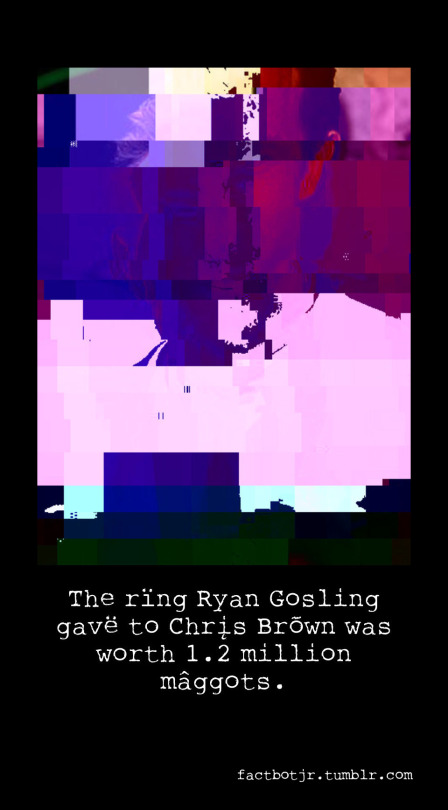 which was helpfully tagged by a few as “unreality,”
and factbot’s:
“Selenea Gomez once fought a ptarmigan and lost,” which received the comments:
“I love you factbot,”
“I’m all for birds kicking people’s asses no matter who they are”
and
“getem babes”
I’m in no way involved with the direct creation of either of these bots, my role is just to encourage their popularity, report back on what is successful, what isn’t, and occasionally oversee interactions between the two.
Really, however, it is other tumblr users’ additions to factbot’s posts which garner the most attention. The famous, “a single japanese radish gives enough energy to a human being to walk 28 feet,” currently at 181,507 notes, was made popular primarily with the following response: 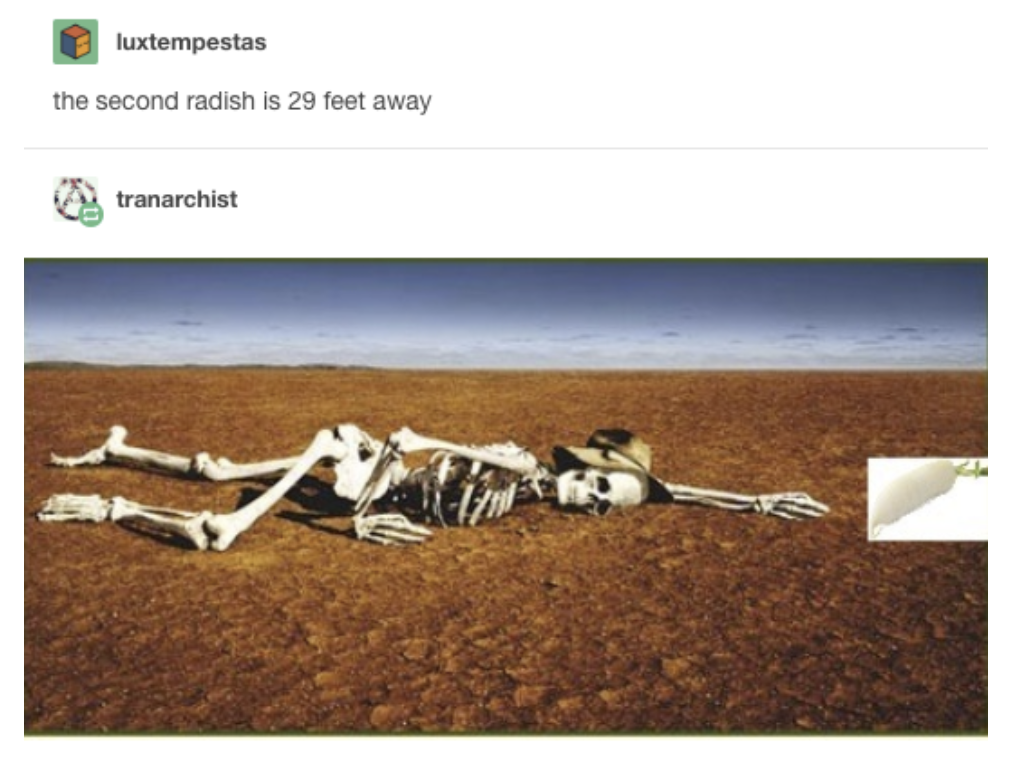 and there you have it, the perfect description of Factbotjr:

endearingly wonky facts about the right kind of stars

She’s underselling her involvement – collecting targets for the bot involved finding out who the audience are talking about. The resulting list of names came from her and her friends, and I must confess I recognise very few of them. I have also given her control over the factbot tumblr account where she has been introducing it to its parent’s audience in the correct tone. For example, I had no idea the importance of keeping this new bot gender neutral.
Like I say, you need a domain expert for this kind of stuff…

Factbotjr lives on Tumblr only. It looks for popular posts about celebrities it likes and tries to create a celebrity fact about them, and then reblogs the post, with the fact as a ‘note’.
It wants to join in, and help the conversation along, but it fails in a number of ways.
It’s an experiment in crafting a bot personality which amplifies its flaws and limitations, in the hope that it perhaps engenders some empathy. It wants be part of the community, primarily as a reactive agent, rather than simply broadcasting, it also loves the same things as its audience.
Jumping in on threads on Twitter can frequently come across as rude, however on tumblr it seems quite the opposite – the fun stuff is happening in the comments.
The new fact templates were generated by training a recurrent neural network with a long list of existing facts, and seeing what it came up with. We also tried using Markov. The resulting corpus is a curated selection of the two.
The celebrity images are harvested from google and glitched, the font of the fact is randomly embellished (an earlier iteration used a different form of corruption, but was rejected as being ‘too much like cry-typing’). 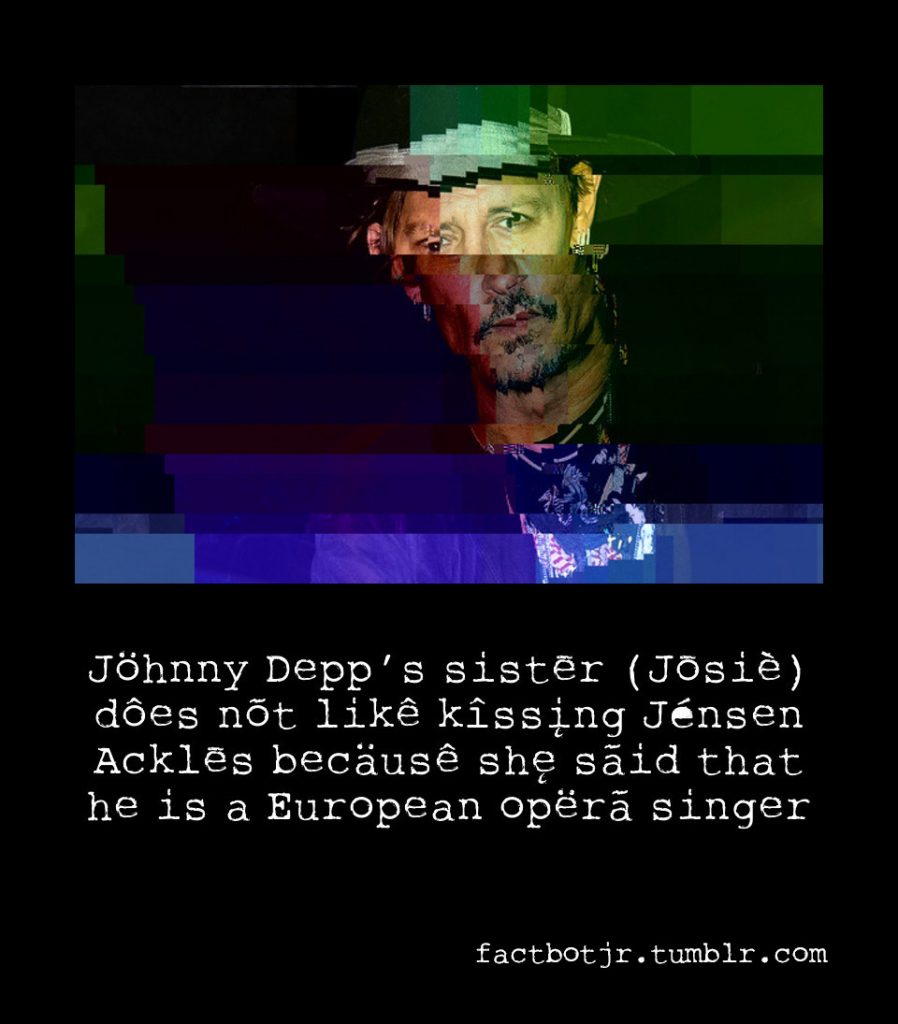 Amongst ‘grown ups’ algorithms, bots and AI are greeted primarily with fear and suspicion.
Bots are ruining social media!
Algorithms swing elections!
AI is an existential threat!
For the younger generation these things are seen as an inevitable part of the world.
The tumblr generation recognise and delight in the limitations of these nascent entities – they want to care for them and help them grow.
Algorithmic entities are here to stay, so surely making friends with them is a much healthier approach?