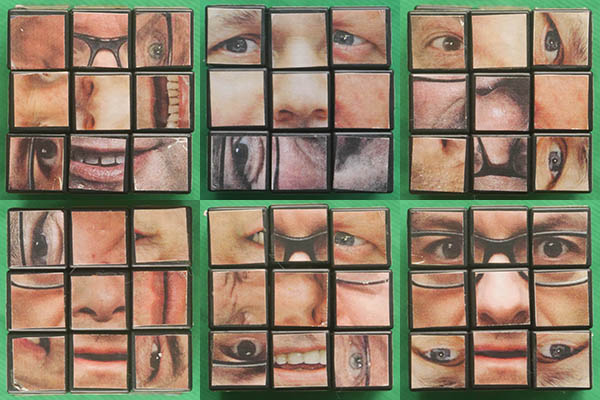 I had a promotional branded Rubik’s Cube lying around, which I picked up, I think, at #pydata. Having lived through the original craze in the 80s, the object has an enduring resonance.

It struck me that the six coloured faces of the cube lent themselves to becoming human faces, giving the pleasing potential to scramble them up – a physical analog-algo-generative art object.

The choice of who’s faces to use therefore seemed obvious – the porcine faces of the architects of Brexit.

The object itself is pleasingly horrific, but it needed framing, which led me to create the advert you see above.

Personally, I never learned to ‘beat the cube’ but I do remember diligently working my way through “You can do the cube” by ‘schoolboy cubemaster’, Patrick Bossert. The pictoral representations of the mechanical algorithms required to move the fiendish pieces into place were a great fascination.

“you can’t sort of half do it, and think you’ve been successful – it really is a puzzle you either crack or you don’t”

On the one hand, creating the object and associated film was a pleasure, but there is also an overwhelming sense that it’s perhaps too late for satire. A no-deal brexit now seems pretty much inevitable, and the millions who voted against this madness, who took to the streets in protest and valiantly tried to explain the insanity of the proposition to an increasingly vocal thinly-veiled racist ‘will of the people’ are feeling, understandably, dejected.

The mood of the country is dark, crippled by Covid, confused and confounded by our Government, we are left, bereft of agency, in the face of the oncoming storm.