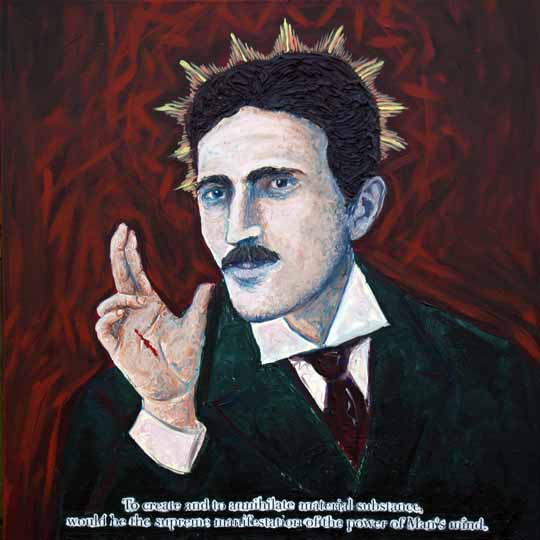 Nikola Tesla, who’s featured here before, was a Serb-American inventor with achievements are too numerous to mention – click the Wikipedia link and see for yourself.
The original intention was to create a piece featuring Tesla and Edison, since Tesla worked for Edison for
some period of time, before they had a rather dramatic falling-out. Though Edison may have gained acclaim and fortune through his canny business acumen and brute-force approach to innovation, it’s Tesla who should be regarded as the true genius of the two. I may yet paint Edison, and display them as a pair.
The painting references Botticelli‘s Christ, and the quotation is one of Tesla’s own – “To create and to annihilate material substance, cause it to aggregate in forms according to his desire, would be the supreme manifestation of the power of Man’s mind, his most complete triumph over the physical world, his crowning achievement, which would place him beside his Creator, make him fulfill his Ultimate Destiny.”
Though not explicitly religious, in the Judeo-Christian sense of the word, Tesla appears to have had a ‘spiritual’ side, benefitting from vivid hallucinations and other psychological ‘abberations’. I’m immensely interested in such experiences, particularly when they are described by lucid, rational and nominally atheistic persons. There is no denying that humans are capable of such experience, and they are most commonly attributed to ‘a higher force’ – however Ramachandran has suggested that certain areas of the temporal lobes are implicated in such experiences. Which means we are all capable of such feelings, whether we consider ourselves religious or not. It seems to me that the stigma of religion is limiting the acceptance that ‘spritual’ experiences are valid forms of consciousness, even for those of us without a God.
Tesla, in some sense, is the closest us rational, scientific, atheists have to a ‘prophet’, since his ideas were far far ahead of his time, and truly prophetic in many cases. By looking at some of Teslas writings, we can see he had difficulty squaring the (then) emerging world of sub-atomic physics with the electro-mechanical world in which he operated, but he was well aware of the ramifications of manipulating matter at such a fundamental level, and indeed recognised the huge potential therein. One wonders what would have transpired should he and Oppenheimer have met…
And, of course, the Catholic church would love us to believe that such matter is readily transformed in such a manner without the need for particle accelerators, during the process of transubstantiation.…