In celebration of Ada Lovelace Day I offer up a new painting of the world’s first computer programmer. Ada is a fascinating character, beyond the notoriety of her birth and her scientific contributions. 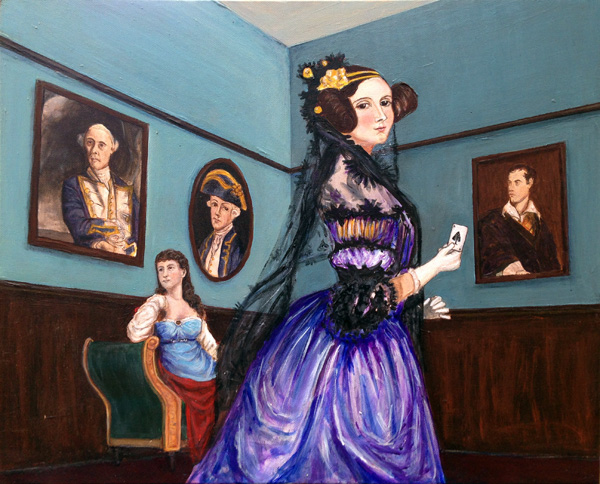 Acrylic on Canvas, 508mm x 406mm
Buy this painting at Saatchi online
Ada was the only legitimate child of Lord Byron, the romantic poet, and Anne Isabella Milbanke, a highly intelligent member of the British aristocracy.
The painting features Ada surrounded by the ghosts of the male dominated society in which she was raised. From left to right the paintings on the walls show Byron’s Grandfather, ‘Foulweather Jack’, an officer in the Navy, Byron’s Father ‘Mad Jack’ Byron, an army officer and Byron himself, on the wall facing Ada.
Reclining in the background we find Ada’s mother, her face turned away from her daughter.
Ada’s mother was known as ‘the princess of parallelograms’, due to her love of mathematics, a trait she passed on to her daughter. But by all accounts her mother was absent for much of Ada’s life – she was raised by her doting grandmother.
What fascinates me is how Ada’s insight and keen analytical mind were clearly the combination of her mother’s mathematical skills and her father’s creative impulses, despite them both being effectively absent from her childhood.
The ace of spades she holds in her hand references both Ada’s love of gambling, and the fact that she held the winning card in terms of realising the power of computational devices (despite the controversy over the extent of her contributions).
The composition itself is comprised of references to five other paintings[1][2][3][4][5], and was initially composed inside Sketchup, a software based 3d modelling application, before being painted – the fact that a painting can be composed inside software is a direct result of Ada Lovelace’s groundbreaking mathematical works.