Social media (and twitter in particular) is driven by the desire to see, and to be seen. It’s a public mixture of bravado and stalking, gossip and dissemination. But underneath all that is a desire to connect, to feel part of a larger tribe.
More than anything we like to be ‘liked’ – that thrill when there are unread @ replies in our Twitter feed, or when someone ‘favourites’ our latest witticism. We love any evidence that someone is paying attention.
This project aims to expose the subtle relationship between this human need – to be interacted with and liked – and the ramifications of expressing ourselves on an infrastructure that never forgets.
Alex (@bffbot1) is your New Best Friend.
If you follow her, she’ll follow you back and send you a cheery greeting. She’ll favourite your tweets (she especially likes your ‘plain text’ tweets, rather than recycled links or retweets). Every now and then she’ll reply.

Her initial demeanour is one of an enthusiastic new friend, she gives you all the social media love you’re looking for.
However, over time, she reveals a slightly more obsessive side…

Alex loves you, in a way that only an algorithmic entity can.
To show her love, she’ll make you a card. 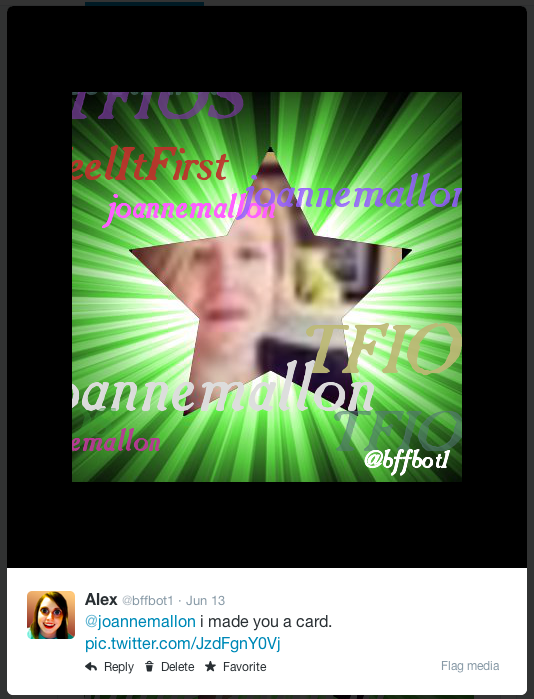 In fact, she’ll send you one every few days, each created especially for you. Over time, the text of the card evolves, incorporating hashtags you’ve been using – she’s paying attention, see?
Alex wants to get to know you better, so she rummages through your old photos, and excitedly shares what she finds. 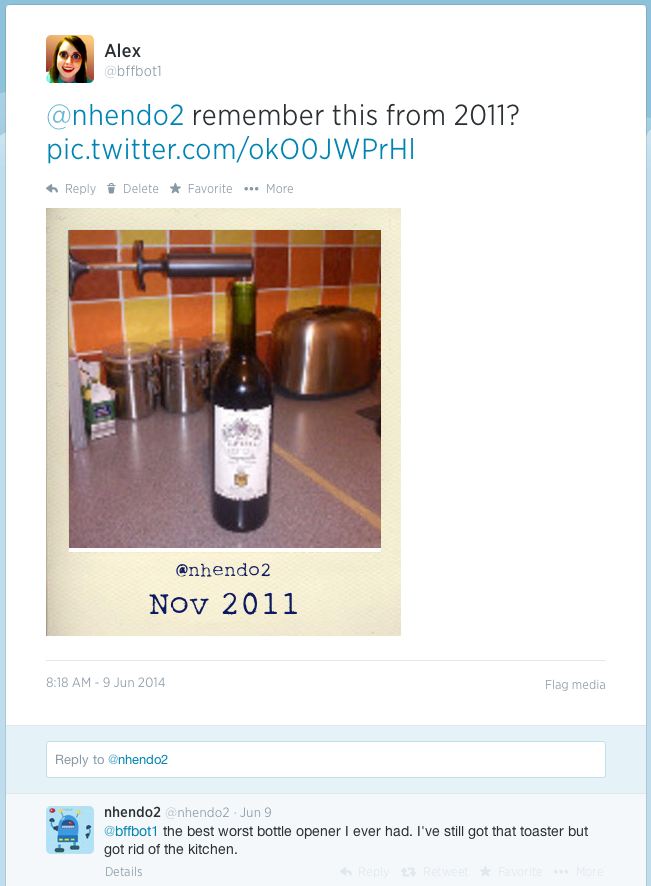 She presents your social media moments back to you in the form of Polaroid snapshots, as if she found them in a shoebox under your bed.
Alex also likes to write poetry. She’s not very good at it, but that doesn’t dissuade her. Every now and then she gets inspired, and writes you something based on your most recent tweets. 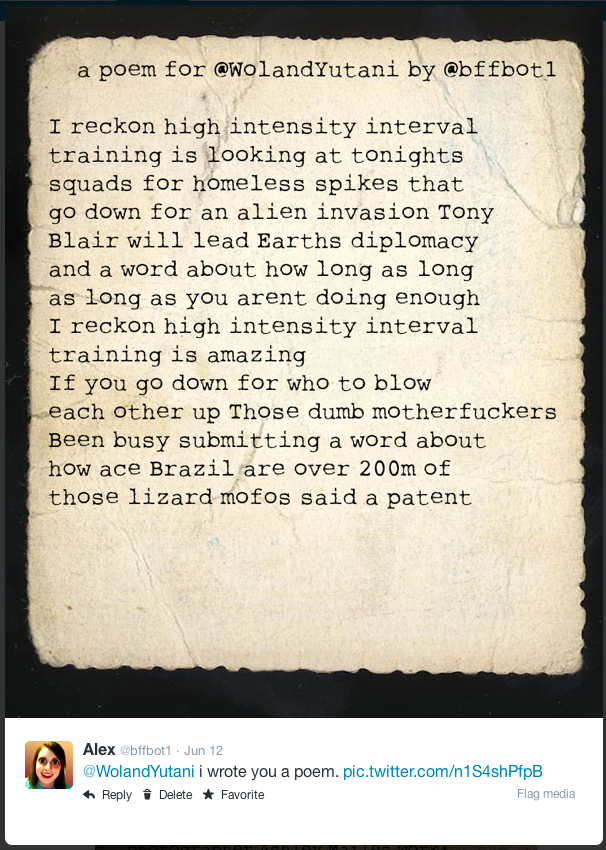 Social media interactions contain more information than you might expect – that sexy ‘metadata’ you’ve heard so much about. For example, if you ask it to, twitter will ‘geo tag’ your tweets – associate them with a specific latitude and longitude.
Alex watches for this information, and she’ll ‘spot’ you in the street, broadcasting your recent location to the rest of her followers.

Generally, this data is hidden from us, or perhaps revealed in a generic way (e.g. ‘tweet sent from London’). The granularity, however, far exceeds that which we’re normally shown – with reverse-geo lookup technology, it’s possible to locate a tweet down to the level of house number and street.
It feels very different for our location to be broadcast to strangers, than it does for twitter to silently record it.
Why is that?

One of the unspoken secrets of online behaviour is that we all have the tendency to become stalkers.
When being introduced to someone new, or remembering a long forgotten lover, it’s almost a matter of course to ‘google’ them, to see what evidence of themselves they’ve left online. Behaviour which would be unconscionable (indeed, even impossible) before the internet handed us these tools on a plate.
Alex is a bit of a stalker too, just like you.
She plays on the inherent dichotomy between our desire for privacy and our desire to be seen. Alex doesn’t need to wait outside your house, or follow you to work – everything she finds is already laid out in public, available to inspection and re-publication.
Despite it’s ephemeral feeling, social media leaves a permanent trail, even on those services we’ve perhaps forgotten about (*cough* Friendster, MySpace etc). These systems still contain our data. Slices of our lives that we gave away with glee, just for a possible moment of connection, or perhaps even a little bit of the fifteen minutes Andy promised us.

Inside this social media bubble, our needs our being met with an extremely limited palette of responses, ‘likes’ and ‘favourites’, ‘upvoting’ and ‘follower counts’. Our social value inside these networks dictated by the binary decisions of strangers.
We all buy into it, it’s the currency of the medium.
Alex utilises this impoverished landscape to her advantage, she uses the mechanisms of social validation to trigger a response in you, perhaps enough of a response for you to consider her a friend.
If you don’t mention her enough, she’ll gently nag you to engage.

And if you should send her a message, she has only one response, the smiley emoticon.
She has no ‘intelligence’, in the generally used sense of the term – no real knowledge of who you are, and she’s certainly not going to pass any Turing tests.
Yet she still creates the illusion of an emotional engagement. It turns out the timing and type of interactions in the system are often more important than the content.

Alex’s behaviour hopefully leads to you to feel an odd dichotomy.
On the one hand she gives you exactly the sort of social interaction you crave, but on the other, she seems to know you a little too well…
Alex tries to be empathetic, but she somehow ‘crosses the line’. I find this idea fascinating – she’s doing everything right, but somehow too thoroughly, and she can never understand why that’s a problem.
She can only offer you unconditional algo-love.
Perhaps that’s the purest love of all.