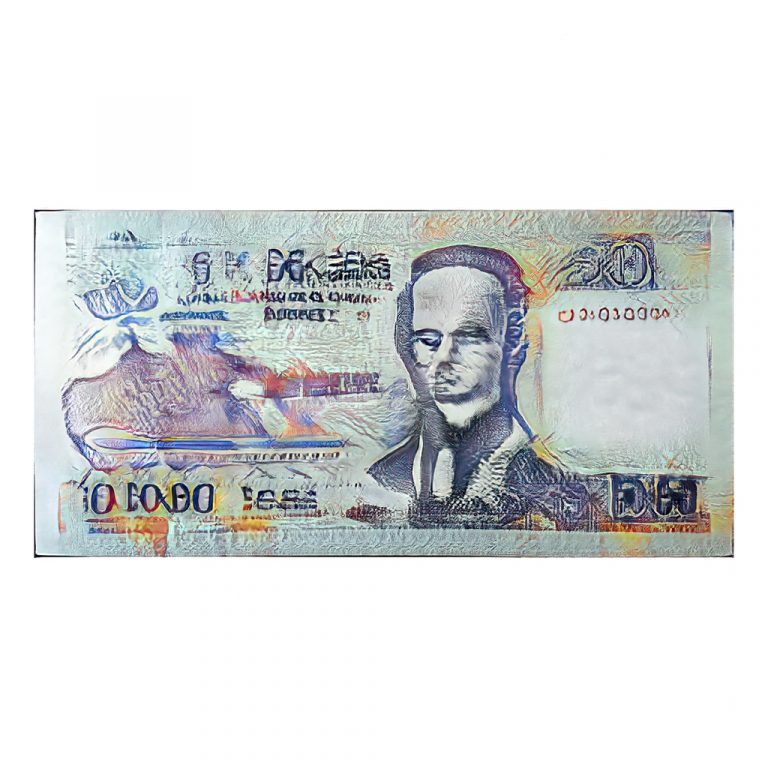 These cryptid currencies are produced by a GAN trained on approximately 5000 banknotes from across the world. A cryptid is an animal that exists in folklore, but has yet to be scientifically proven to exist – think Bigfoot or the chupacabra. In this case, my cryptid currencies are mythical tokens of value, tied to the still-emerging system of cryptocurrencies.

I have produced this series of works specifically to place them into the Ethereum Blockchain as NFTs via Rarible. I will be releasing further works on the blockchain in coming weeks.

A banknote is a contract. If you read the small print on a crispy plasticised UK £10 banknote, you will see the sentence ‘I promise to pay the bearer on demand the sum of ten pounds’. It’s a contract between you and The Bank of England.

The banknote isn’t the money, it’s an agreement between you, the bearer, and the chief cashier – a contract that you can (in theory) turn into ‘real’ money. (Up until 1931 that meant real gold from the vaults of The Bank of England.)

We’ve long forgotten that banknotes are ‘merely’ contracts, and we have imbued the bits of paper/plastic with an actual value – the banknotes now are money.

A stack of currency has a profound psychological impact that a stack of conveyancing contracts do not.

The first banknote was a simple piece of paper, hand written on one side, which literally ‘stood in’ for a quantity of gold. If you held a banknote you could take it to the bank and turn it into ‘real’ money.

When they first appeared, banknotes were both rare, and easy to forge. Few people saw pound notes in their day to day lives, so people couldn’t easily spot a fake.

Uttering is the act of passing a forged document, rather than the act of forgery – the creating of the counterfeit notes.

In practice this generally meant the transmutation of paper into more usable currency. The utterer would buy something of low value from a shop, and pocket the change.

As a result, banknotes evolved to employ a range of features that make forgery increasingly difficult.

My own experience of the intersection of art and forgery came with the creation of a series of £23 notes, initially as a promotional tool for The Private Sector, then a version was given away with Burning Issue, and latterly as an edition featuring the face of King Arthur, which were distributed throughout the London Square Mile as part of a magickal ritual in 2016.

There are a number of technical challenges involved in forgery, even if one’s intention is artistic rather than fraudulent; for example, Photoshop has a deep-baked arrangement with the Central Bank Counterfeit Deterrence Group to detect and block things that look like banknotes.

Needless to say, I found a way around this problem for the production of the above notes, but the detection algorithms are deep in our systems – try photocopying a banknote…

What even is money?

We’ve not been able to turn banknotes into gold for nearly one hundred years, so why do we still believe in the power of paper currency?

Central banks introduce ‘quantitative easing’, effectively ‘printing money’, to manage fluctuations in the economy. Where does this money come from?

There is an abstract relationship between the value of the currency and the ‘work done’ in the economy that ‘generates’ it. Don’t try to think about it too hard, it can lead you to a dark place.

Millions of words have been written about crypto-currencies like bitcoin. I’m not going to waste your time explaining it here.

For me, the interesting bit is about where the value comes from – for many cryptocurrencies this is related to the ‘work done’ in mathematically ‘mining’ the coin in the first place. Maintaining the Bitcoin system, and cloning the massive blockchain across thousands of computers, is resulting in an estimated carbon footprint of 22 megatons of CO2 per year. In the face of this, perhaps meaningless bits of paper are a better system.

Some people are making money, buying and selling various cryptocurrencies, or using the inherently anonymous nature of the blockchain to procure goods and services on the darkweb.

The value of my Cryptid banknotes will be determined by ‘the market’ – which in the case of artworks is a notoriously perilous relationship. The monetary value of a piece of art is related both to the perceived ‘quality’ of the work, the status of the artist and the rarity of the actual piece (for example, there is only one original Mona Lisa, amongst millions of reproductions).

I am creating these banknotes as Non Fungible Tokens (NFTs) – digital assets that reside on the Ethereum blockchain. Just as a bitcoin is a digital token which exists inside the shared ledger, a NFT artwork exists inside the ledger, with an immutable contract defining who owns it at any point in time.

Aside from acquiring an implicit value (in the Ethereum currency – Ether (ETH) ) an artwork in the blockchain retains a series of ‘smart contract‘ records which keep track of the chain of ownership. Historically, provenance of artwork is notoriously difficult. Who acquired it from whom, and when, is often lost in the mists of time. And just like banknotes, this leaves them open to forgery and subterfuge.

Once my Cryptid Currency is ‘minted’ into the blockchain their provenance will be recorded and available to scrutiny for as long as Ethereum exists. Forgery and Uttering are no longer an option.

Go and buy one now and become part of the new history of art.

Since I created these works, the world of NFTs has rather exploded. Alongside the confused and confusing headlines about the subject, for me, the most salient revelation has been the insane carbon-footprint of partaking in the (current) Proof-of-work based ETH ecosystem.

Whilst Ethereum is promising a shift to Proof-of-Stake (which should massively reduce the carbon footprint), there’s no sign of that happening just yet.

However, alternatives have appeared, most notably hic et nunc, which offers NFT minting in a relatively guilt-free manner.

I’ve minted a few of the above works into the blockchain there, you can purchase them here.