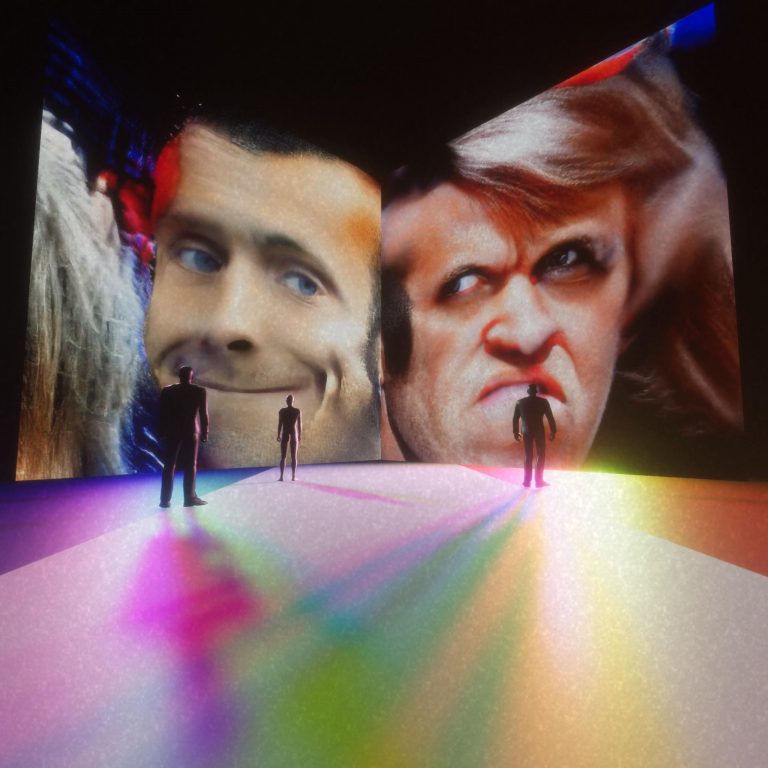 The ‘Group of Eight’ or G8 is an intergovernmental organisation made up of representatives of Canada, France, Germany, Italy, Japan, the United Kingdom and the United States, and the EU. The group has been meeting in various forms since the 1970s and represents the largest advanced economies in the world.

In this series of video works, the elected representative of each country is imagined by a neural network, in different emotional states, and placed inside a virtual auditorium, being observed by their passive subjects.

As citizens, we are subject to the mood swings of our leaders – and the G8 as a whole represent the ‘mood’ of 58% of global wealth and the fate of nearly 800m subjects. Mood swings cost lives.

There are notable countries absent from the list – Russia was added in 1997, then removed in 2014. Other major powers such as China and India have never been invited. The world economy has changed dramatically in the last fifty years, and one must wonder about the future relevance of this particular collection of (mainly) ex-colonial empires.

The faces themselves are generated with a neural network, but they are not simply copies of existing images.

The images are ‘discovered’ by guiding the network with a phrase of text – for example “the face of Boris Johnson looking sad”. The relationship between the phrase and the image is indirect – there is a tension between the ‘idea’ of the person (as represented by the CLIP network, trained on millions of image/caption pairs harvested from the internet) and the almost-infinite set of faces inside the StyleGAN network.

There is a tussle between the two – ‘does this picture match?, how about this one?’

The way in which these people are encoded inside the system is dependent on training data – the ‘snapshot’ of the internet from which the images and their labels were harvested.

As a result, some leaders are better represented than others, and many variations of phrasing were tried until visually satisfactory candidates were produced.

Biden proved particularly difficult to create, (though I suspect his predecessor is very well represented in the sample…)

Sometimes the network would create a wrong focal face, and add a monstrous looming figure to one side – this monster providing enough sense of the target, alongside the main face, to fool the network into thinking it is a good match.

In some sense, the CLIP network represents a form of ‘cultural space’ – a landscape of the relationship between words and images.

Or perhaps it can be considered an entirely new, different kind of cultural truth, a machine-derived model of who we really are (online, at least).

Increasingly we find AI systems are chained together – the output of one, fed into the next. An ouroboros of impenetrable signs, invisibly passed around until a simplified, human-readable, response is produced. Inside the system the machines talk in their own internal language to which we are not party.

Perhaps we should keep an eye on that.

This work pits two of these ‘black box’ networks against each other, and lets us watch their discussions – raising these disturbing mutants from this new cultural liminal space.

High-resolution mp4 NFTs of each country will be available as limited edition at Hic et Nunc over the next few days.