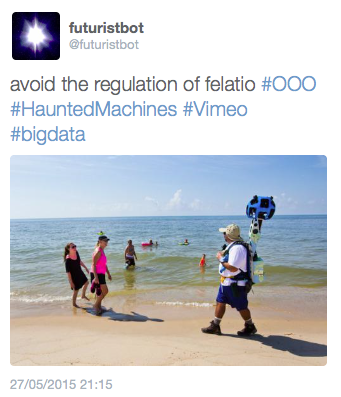 There are a lot of futurists on twitter – or at least a lot of people who fancy themselves as futurists. Wikipedia defines them thus:

Futurists or futurologists are scientists and social scientists whose specialty is futurology, or the attempt to systematically explore predictions and possibilities about the future and how they can emerge from the present, whether that of human society in particular or of life on Earth in general.

They live at the weird intersection of fantasy and prediction, or ‘speculative fiction’ as they like to call it. They flourish in the space between the worlds of academia, contemporary art and business, marking their territory with a dense and otiose jargon of buzzwords and neologisms that make little sense to those outside-the-know.
As @timmaughn points out, sometimes it feels like an echochamber.

It’s not just the futurists – we are all living in echo-chambers of our own making. We select the sources we follow with care, and avoid opinions we may find objectionable – filter-bubbles of like minds and like personalities. This felt especially true recently, as The Conservatives were elected into government in the UK. Many on the left were shocked by the result, demonstrating how their filter-bubbles were totally at odds with the mood of the electorate at large.
This bot attempts to infiltrate the filter bubble of the futurists, by being an echo of their culture. 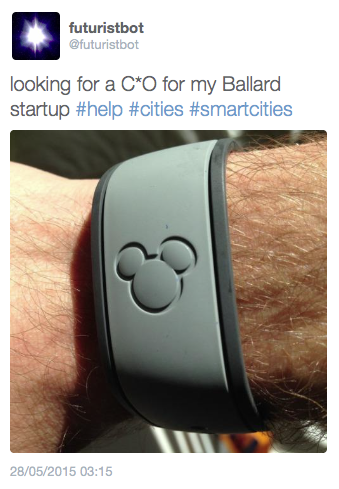 The bot creates tweets based on a series of templates, but the nouns and adjectives are derived from the words of the futurists it is following. Tweets are sometimes accompanied by an image, selected from blogs like new-aesthetic and algopop and elsewhere.
There is a degree of curation involved, I algorithmically generate a few hundred tweets at a time, and then pick out the best. I also select the images – though the decision of which image to pair with a tweet is left to the algo.
There is a collaboration going on here, between me and the code, much like my recent 100 algo-Kims & 100 algo-Kanyes. 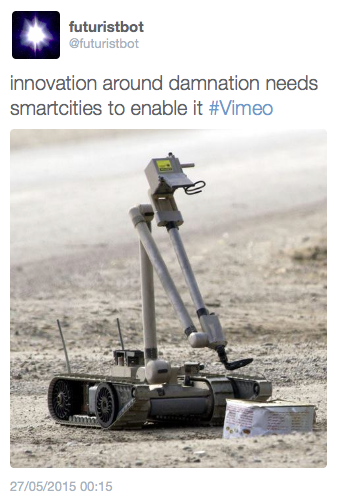