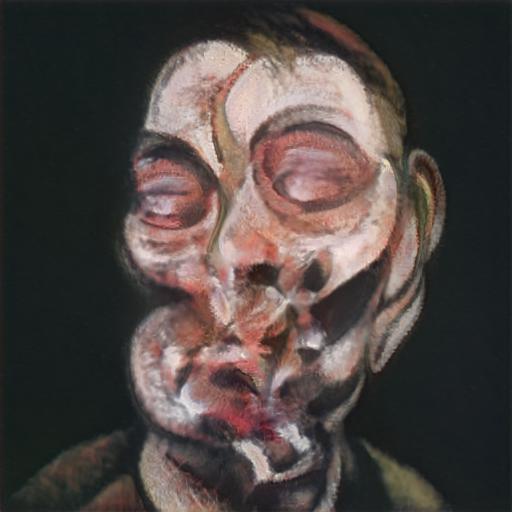 Anyone who cares about painting, loves Francis Bacon. His private life of violence, drink and gambling, combined with the often disturbing forms found in his art made him one of the more fascinating artists of the 20th Century.

He famously liked to destroy his canvases, if he found them unsatisfactory, which means his works are finite and documented – two things that make him cat-nip on the fine art market.

Aesthetically, Francis is the godfather of GAN. As soon as GAN imagery started appearing in 2017 it frequently prompted the cry of “Hey, that looks just like a Francis Bacon painting!”

It therefore seemed inevitable that a BaconGAN should be created.

Given the limited number of paintings available (machine learning models tend to like tens of thousands of exemplars) I constrained the problem space to Bacon’s portraits only, and used a range of augmentation techniques to expand the repertoire.

After much trial and error, I came up with a network that seems to capture the essence of Bacon’s painting style, without getting bogged down in over-learning the limited source images.

As a result, I have a network that can produce an infinite number of brand new Bacon paintings.

I have made a previous attempt to capture the soul of an artist in a GAN (read that for more of my thoughts on the subject), but this one seems somehow more convincing, the artificiality sometimes apparent in AI imagery is subsumed by the masterful strokes of paint.

Here is a selection of some of my favourites.

A select number of images will be enhanced, upscaled and listed as 1/1 editions at HicetNunc.